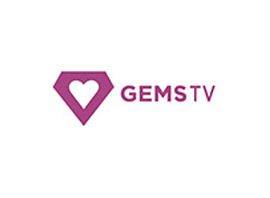 Gems TV is a British reverse auction jewellery shopping channel, officially the first reverse auction in the UK. The channel is available on Sky, Virgin Media, Freesat, Freeview and online. The channel operations are based at Eagle Road Studios in Redditch, near Birmingham. As of 2013, the channel broadcast live 24 hours a day.

The channel was an independent company until the merger of Eagle Road Studios and Thaigem, which formed ´Gems TV UK Limited´; the original founders left the company and in 2008 floated on the Singapore Stock Exchange and become a corporate company; Gems TV Holdings Limited.

The channel´s original purpose was to sell affordable gemstone jewellery manufactured by its production facilities in Chanthaburi, Thailand. To reduce costs the parent company later reduced its own manufacturing and bought in jewellery from other suppliers.

On 1 February 2010, the manufacturing operations at the company´s factory in Chanthaburi, Thailand were closed down to reduce costs and increase profit margins. This caused many employees to be made redundant.

Jewellery Maker is the first new sister channel since Gems TV and Rocks TV merged. The channel was launched on 1 May 2010, selling jewellery-making kits at fixed prices, the first channel of its kind in the UK. As of 2013 the channel broadcast live from 9am to 1pm and 5pm to 9pm daily, with its shows rebroadcast during its downtime. On Freeview, where Gems TV is available on 5* from 9am to 1pm, Jewellery Maker is available on channel 43 during its live show (channel 43 carries Gems TV at other times). From February 2014, Jewellery Maker now has three shows a day the morning show 9am -1 pm the designer inspirations show 1pm -5 pm and the evening show 5pm-9pm, designer inspirations are repeated throughout the night from 9pm -09.00am or you can watch the shows on YouTube along with having a channel on the same site.